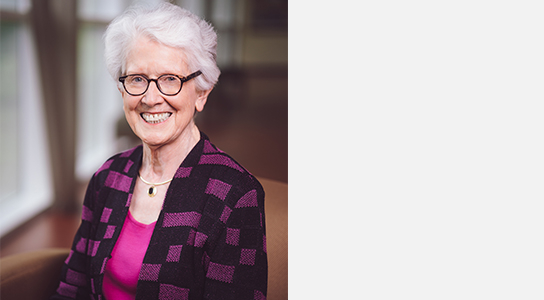 In a letter of intent to retire submitted to TBR Chancellor Flora W. Tydings, Bowyer stated, “I have enjoyed my various positions since 1972, but in particular my work at DSCC has been a labor of love. I grew up in rural western Illinois, a region very similar to the service area of DSCC. Since the start I have felt at home here, and could identify with the problems facing this rural region. As you can imagine it will be difficult to leave, but I have projects and trips that I have put on hold until I had more free time.”

She married the late Dr. Carlton Bowyer and moved to Memphis in May of 1972.

On November 5, 1984, Bowyer became interim president of DSCC until she was appointed to her current position of president on May 1, 1986.

“Dr. Bowyer has served Dyersburg State Community College as president for 37 years – more than two-thirds of the college’s history – and has never once waivered in her absolute devotion and commitment to her students and their success – and by extension, the success of Northwest Tennessee,” stated Chancellor Flora W. Tydings, Tennessee Board of Regents. “That commitment and her remarkable combination of stability and innovation have made Dyersburg State one of the finest colleges in Tennessee and the nation. She is revered and respected by her peers, and shares her experience and wisdom graciously. Just last month, Dr. Bowyer led a seminar for all the presidents in our system on DSCC’s successful implementation of an innovative effective-teaching practices program, in partnership with faculty. On our system’s weekly wide-ranging Presidents’ Calls during the pandemic, she has raised questions – and answered many others – that benefit all 40 of our colleges and their students. We will all miss her but thankfully, she’s serving through the end of the year – another sign of her devotion to Dyersburg in that she’s giving us ample time to search for a successor, who will have big shoes to fill.”

Since becoming interim president in 1984 and president in 1986, Bowyer has led DSCC through significant growth. When she started, the College consisted of only its Dyersburg campus, but Bowyer has since spearheaded the development of off-campus centers in Covington, Trenton and Union City. She was instrumental in opening the Gibson County Center in 1991 and the Jimmy Naifeh Center at Tipton County in 1996. The first year of Bowyer’s tenure at DSCC included a graduating class of 83 students. In 2020, the College had its highest number of graduates with 494 students. Enrollment has grown by more than 100% during her tenure, peaking at 3,751 in 2011-12.

Bowyer began the College’s first Annual Fund Campaign in 1985-86. Over the past 36 years, these campaigns have raised approximately $30.7 million dollars. She spearheaded the DSCC Foundation, which was chartered in 1988, and began raising money for an endowment fund that now totals over $10.9 million.

Bowyer has served on professional boards in various capacities including President, Tennessee College Association; Chair, Northwest Tennessee P-16 Council; past Chair and Vice President of Education for the Dyersburg/Dyer County Chamber of Commerce; member of the Dyersburg Kiwanis Club; Board member for the Heart of the South Girl Scout Council; past Chair of the Committee on Latin American Schools of the Southern Association of Colleges and Schools (SACS); member of the Executive Council of the Southern Association of Colleges and Schools Commission on Colleges (SACSCOC) Board of Trustees; honorary Chair, West Tennessee Girl Scouts Heart of the South 100th Anniversary; past Chair of the West Tennessee United Way Board; Chair of Fund Raising for the Dyer County Chapter of the American Red Cross in 2011-12 and current Board member; past member of the Board of Directors of WLJT-TV (public television); past member of the National Advisory Committee on Institutional Quality and Integrity for the U.S. Secretary of Education; and past Chair of the Dyer County YMCA Board of Directors. She graduated from Leadership Memphis in 1983 and from the Dyer County Leadership Program in 1997. Bowyer was also a member of the Founding Board of Directors for the WestStar Program.

Over the years, she has received recognition for her service and dedication to various organizations through awards presented to her such as “Woman of the Year” in 1984 by the Laurelwood Business and Professional Women’s Club; “Woman of the Year” in 1987 and 2007 by the Dyersburg/Dyer County Chamber of Commerce; “Woman of Distinction” in 1992 by the Reelfoot Girl Scout Council; the National Council of Instructional Administrators Outstanding Service Award in 1993; named “One of 20 West Tennessee’s Most Influential Women” Sterling Award in 2010; and a Meritorious Service Award from SACSCOC in 2010. She was awarded an honorary doctorate from Knox College in 1995 and from Southern College of Optometry in 2004. In addition, Bowyer became the first female college president inducted into the Tennessee Community College Athletic Association (TCCAA) Hall of Fame in 2019. She has presented or written 44 programs, chapters and publications.