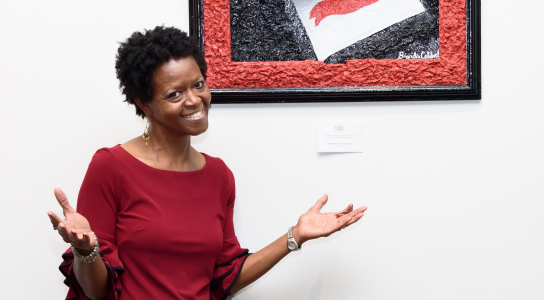 March 7 at the Jimmy Naifeh Center at Tipton County

An art exhibit by Dr. Brenda Caldwell, the self-proclaimed “Paper Towel Artist®,” will be on display beginning March 1 at the Dyersburg State Community College (DSCC) Jimmy Naifeh Center at Tipton County. Dr. Caldwell’s art will be on display until April 29 throughout the Ripley Power and Light Lobby inside the Learning Resource Center, Student Center and Tipton County Public Library. An artist’s reception will be held at this location March 7, from 6:30-8 p.m. and will feature an unveiling of a three-dimensional painting the artist is donating to the College. This event is sponsored by DSCC.

In 2011, Dr. Caldwell received a commission from a loved one that sparked a rediscovery of her love for creative expression. She discovered a unique technique using foam and typing paper to create a textured look. A few years ago, the idea of using paper towels was discovered accidentally  while wiping paint off her hands from painting strips of copy paper. She realized the paper towels had a better thickness and her trademark technique of sculpting on canvas was born. Dr. Caldwell calls her artwork "three-dimensional canvas sculptured art,” using paper towel as her medium. “I was inspired to choose the name Paper Towel Artist after reading the story of Japanese artist, Chie Hitotsuyama, who creates fascinating life-size sculptures of animals out of old newspapers,” stated Dr. Caldwell. “Her story gave me the confidence to pursue establishing myself as the creator of three-dimensional canvas sculptured art using paper towels.” Caldwell has applied for a patent for her process.

In 2018, her artwork caught the attention of The Proctor & Gamble Company, maker of Bounty® paper towels, and has featured her work on their social media platforms. Her upcoming exhibit, "From Bounty Pieces to Masterpieces" at DSCC, will highlight her range of paintings, from animals to clothing. This exhibit has also been featured at the Memphis Benjamin Hooks Central Library Gallery and the Kroc Center of Memphis.

Fondly known as "Dr. B.," Caldwell's transformative art is an extension of her work as a psychologist specializing in forgiveness therapy; an empowerment speaker for youth and adult audiences nationwide; and an author of two books. She also serves as an empowerment coach for WMC-TV Channel 5's Bluff City Life show with a segment entitled "Living Free with Dr. B."

A native of Memphis, she hosted the first live auctions of her works in 2015 in the city’s historic midtown arts district, where all 10 of her exhibited pieces were sold. Since then, Caldwell has been commissioned to create her trademark three-dimensional canvas sculptured artwork for clients across the country. She says her artwork is influenced by her faith and deep desire to bring hope, healing and inspiration to others. A visionary artist, she is also a self-described “Hopeologist." Caldwell believes her art serves a greater purpose in people’s lives. Caldwell says, “I want people to feel inspired, empowered, strengthened, and hopeful and above all, God’s love.”