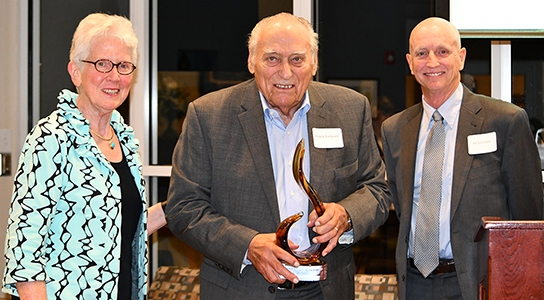 Dyersburg State Community College (DSCC) celebrated another year of successful fundraising with $1,759,670 raised by the DSCC Annual Fund committees during the 2017-18 academic year. A celebration dinner was held on the evening of June 26 inside the Student Center on the Dyersburg campus to recognize the hard work of committee members and the generosity of 569 donors.

DSCC President Karen Bowyer welcomed over 40 campaign members and guests at this event, along with DSCC staff. Chair Kari Romero, owner of D&B Properties-Sonic, directed the campaign with the help of committee members from Dyer and Gibson counties.

Wrapping up the evening event was the presentation of the Tennessee Board of Regents (TBR) Regents’ Award for Excellence in Philanthropy to Wayne Karlgaard of Dyersburg. Regent William Summons presented the prestigious award to Karlgaard for his gracious support of time and funding to DSCC since 1991. Karlgaard began giving annual contributions to the College in the early 2000s when he set up an endowment scholarship fund in honor of his late wife, alumna Doris Ann Parmenter Karlgaard. Since that time, 33 scholarships have been awarded to second-year students.

Student guest speaker Savannah Alls of Dyersburg, a recipient of the Doris Karlgaard Scholarship, thanked Karlgaard for his generous support, which provided her with funding to help cover tuition and other needed expenses. Alls is currently pursuing an Associate of Science degree in General Studies.

DSCC’s Annual Fund Campaign was established in 1985 in order to raise the matching funds needed for the Center of Emphasis. The nursing program is the current center of Emphasis at DSCC. During the past 33 years, $26,382,201.17 has been raised in our region. These monies have been awarded to students for scholarships or invested in academic programs. In 2017-18, 506 DSCC students received assistance from the Annual Fund.

DSC_0518 – Wayne Karlgaard (center) of Dyersburg was the recipient of the Regents’ Award for Excellence in Philanthropy June 26. On hand for the presentation were Dr. Karen Bowyer (left), president of DSCC, and Regent William Summons (right), Tennessee Board of Regents.