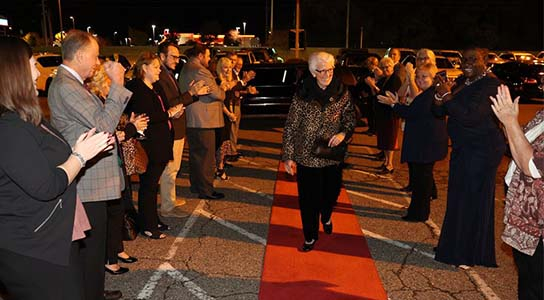 Dr. Karen A. Bowyer has served as president of Dyersburg State Com­munity College for over 37 years, and was the first female and third president to lead the College. In total, she has nearly 50 years of dedicated service in higher education as either an educator or an administrator and 8 additional years in 7-12th grade education. Most notably, Bowyer was the first female president at a public postsecondary college in the State of Tennessee and she is the first female and longest-serving president in the Tennessee Board of Regents (TBR) system. Dr. Bowyer began working in the TBR system when it was founded in 1972.

Bowyer’s love for education was ignited when she began teaching math­ematics at Libertyville High School in Libertyville, Illinois, from 1963 to 1966. Her lifelong career in postsecondary education began when she traveled overseas to serve as a mathematics department coordinator and instructor at Colegio Bolivar, Cali, in Colombia, South America from 1967 to 1970. Upon returning back to the United States, she became a graduate assistant of international programs at the University of Alabama from 1970 to 1971. She taught in Mexico City, Mexico, at Colegio Americano – an American International School, from 1971 to 1972 as a mathematics coordinator and instructor. Bowyer served as a temporary instructor of mathematics at Memphis State University from September to December 1972. She then came to Shelby State Community College where she began work there as a part-time instructor of mathematics from January to June 1973; an assistant professor of mathematics and methodology from 1973 to 1974; head of the department and assistant professor of mathematics and methodology from 1974 to 1978; a coordinator of multicultural studies from 1975 to 1978; interim president from July 1981 to October 1982; and dean of instruction and associate professor of mathematics and methodology from 1978 to 1984.

On November 5, 1984, Bowyer became interim president of DSCC until she was appointed to her current position of president on May 1, 1986. Since becoming interim president in 1984 and president in 1986, Bowyer has led DSCC through significant growth. When she start­ed, the College consisted of only its Dyersburg campus, but Bowyer has since spearheaded the development of off-campus centers in Covington and Trenton. She was instrumental in opening the Gibson County Center in 1991 and the Jimmy Naifeh Center at Tip­ton County in 1996. The first year of Bowyer’s tenure at DSCC included a graduating class of 83 students. In 2020, the College had its highest number of graduates with 494 students. Enrollment has grown by more than 100% during her tenure, peaking at 3,751 in 2011-12.

Bowyer began the College’s first Annual Fund Campaign in 1985-86. Over the past 36 years, these campaigns have raised approx­imately $34.5 million dollars. She spearheaded the DSCC Foundation, which was chartered in 1988, and began raising money for an endowment fund that now totals over $11.3 million.

Over the years, she has received recognition for her service and dedication to various organizations through awards presented to her such as, “Woman of the Year” in 1984 by the Laurelwood Business and Professional Women’s Club; “Woman of the Year” in 1987 and 2007 by the Dyersburg/Dyer County Chamber of Commerce; “Woman of Distinction” in 1992 by the Reelfoot Girl Scout Council; the National Council of Instructional Administrators Outstanding Service Award in 1993; named “One of 20 West Tennes­see’s Most Influential Women” Sterling Award in 2010; and a Meritorious Service Award from SACSCOC in 2010. She was awarded an honorary doctorate from Knox College in 1995 and from Southern College of Optometry in 2004. In addition, Bowyer became the first female college president inducted into the Tennessee Community College Athletic Association (TCCAA) Hall of Fame in 2019. She has presented or written 44 programs, chapters and publications.

In December 2021 she will receive the James T. Rogers Distinguished Leadership Award from the SACSCOC.