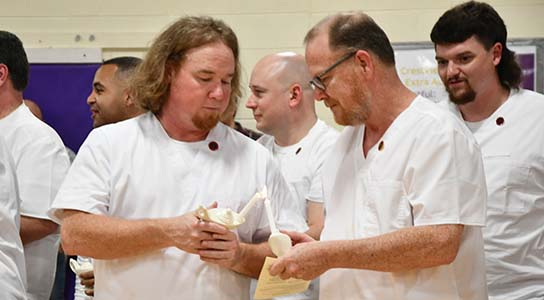 Dyersburg State Community College (DSCC) honored its 77th and 78th nursing classes with a ceremony for 35 graduates in the traditional nursing program and 14 graduates in the Paramedic to RN program on Dec. 10. A total of 2,078 nursing students have graduated from DSCC over the past 40 years.

Kisha Gray opened the ceremony with the invocation. Amy Johnson, dean of nursing, welcomed the graduates and encouraged them to maintain their positive spirit and love for mankind.  DSCC President Karen Bowyer acknowledged the graduates and congratulated them on their resilience, adaptability, and willingness to carry forward during difficult times. The ceremony proceeded with a special message from Robert Price, traditional class president, and Chad Hollingsworth, Paramedic to RN class president.

The Clinical Practice Award, selected by members of the nursing faculty, was presented by W.C. Robinson to traditional nursing class graduate Jaelyn Holliman of Bartlett; and Paramedic to RN nursing class graduate Jeremy Sheperd. This award is given to nursing graduates who demonstrate qualities such as the practice of nursing as a humanistic art and science, the recognition of each person as a unique individual, and acceptance of legal and ethical professional accountability.

President Karen Bowyer was presented the Forever Friend of Nursing Award from the nursing faculty for her years of hard work and dedication to DSCC. Dr. Bowyer will retire with 37 years of service at DSCC on Jan. 4, 2022.

The 35 graduates of DSCC’s fall 2020 traditional nursing class include:

The 14 graduates of DSCC’s fall 2020 Paramedic to RN nursing class include: