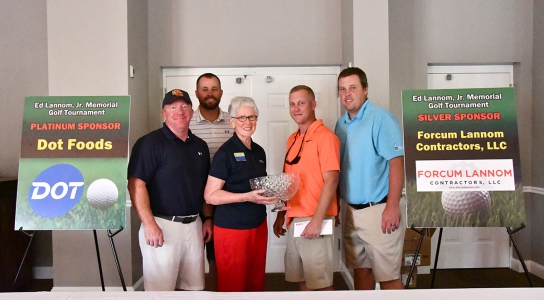 Twenty teams participated in the annual event led by co-directors Tommy Allmon and Patrick Williams. DSCC President Karen Bowyer served as the presidential putter throughout the day on the 18th green.

Tournament winners were recognized in two flights of play along with winners of special contests including a closest to the pin contest, a putting contest and a longest drive contest sponsored by West Tennessee Golf. A $1 million hole-in-one contest was sponsored for the third year in a row by The Farms Golf Club. Back by popular demand this year was the “Eagle Swing” in which golfers purchased a chance for a member of DSCC’s baseball or softball team to take the first swing with a bat from the No. 14 hole.

David Alexander won a free round of golf from The Farms Golf Club when he made the longest drive of the day while Mark Brooks and Kenneth Hartsfield were the closest-to-the-pin contest winners, making them both eligible to play for the $1 million hole-in-one contest. Although both made respectable drives, they each came up short in the end. In addition to this contest, the top golfer who was closest to the pin on hole No. 4 was Kenneth Hartfield, and the winner of the putting contest was Easton Lavelle, both of whom received a free round of golf sponsored by The Farms Golf Club.

Student-athletes from DSCC’s basketball, softball, baseball and cheer teams were on hand throughout the day to assist tournament participants as needed.

DSCC’s annual golf tournament is named in memory of Ed Lannom, Jr., a longtime supporter of the College. All proceeds from the event benefit student-athletes with scholarships and support for athletic programs. For more information about DSCC Athletics, please contact Jonathan Taylor, interim athletic director, at 731-286-3259.