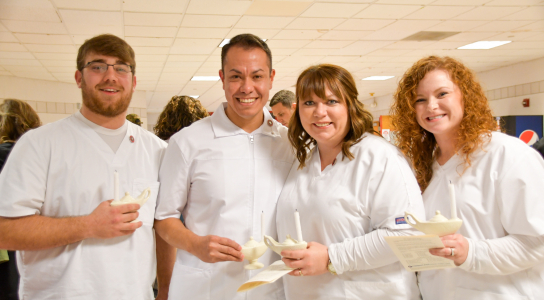 Dyersburg State Community College (DSCC) honored its 68th  and 69th nursing classes with a ceremony for 37 graduates in the traditional nursing program and 17 graduates in the paramedic to RN fast track program Dec. 13. The ceremony took place inside the Brighton High School Gymnasium. A total of 1,860 nursing students have graduated from DSCC over the past 39 years.

Amy Johnson, dean of nursing, opened the ceremony with an introduction of faculty and staff. DSCC President Karen Bowyer acknowledged the graduates and congratulated them on their accomplishments. The ceremony proceeded with the recognition of 37 first-year nursing students by instructor Kim Dew.

“It was a mere two years ago when we all met,” stated Lavion Sain. “Little did we know how much we would grow together, and now all of us are like family.”

The Clinical Practice Award, selected by members of the nursing faculty, was presented to traditional nursing class graduate Josh Taube and paramedic to RN nursing class graduate Will Camarillo of Memphis. This award is given to nursing graduates who demonstrate qualities such as the practice of nursing as a humanistic art and science, the recognition of each person as a unique individual and acceptance of legal and ethical professional accountability.

The Peggy Pendergrast Award was presented to traditional nursing class graduate Audra Matthews and paramedic to RN class graduate Frank Miller of Decaturville. This special award, given in honor of Peggy Pendergrast, the founding director of the DSCC nursing program, is presented to a student demonstrating the qualities that are essential for effective nursing practice.

Amy Johnson, DSCC dean of nursing, presented class pins to the graduates. Following tradition, each nursing graduate received a ceramic replica of the lamp carried by Florence Nightingale, a pioneer in the nursing profession. Nursing graduates lit the lamps and recited the Nightingale Pledge.

The 37 graduates of DSCC’s December 2019 traditional nursing class include:

The 17 graduates of DSCC’s December 2019 paramedic to RN fast track class include: