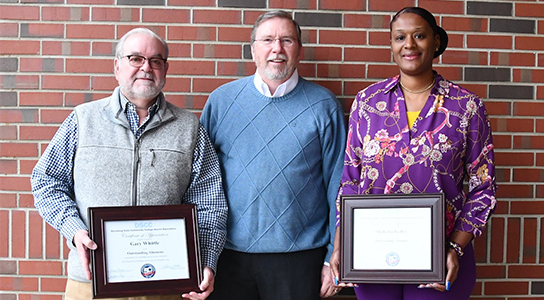 Danny Walden, president of the DSCC Alumni Association, and Dr. Karen Bowyer, president of DSCC, presented the awards in front of over 200 faculty and staff during the College’s annual spring update event.

Kelley began her career working at the West Tennessee State Penitentiary in Henning as a correctional counselor in Sept. 2002. In Dec. 2012, she started working for Mark Luttrell as the associate warden. In Aug. 2016, she became the associate warden for the Women’s Therapeutic Division.

She is a member of Zeta Phi Beta Sorority Inc. She serves as the youth director of Pavilion of Hope. She has received the most outstanding community Beta Alpha Lambda Zeta organization award in 2017 and 2019 from the Community Resource Development (CRD) Committee.

While attending DSCC, Kelley played basketball for the Lady Eagles and was a member of Multicultural Association of Successful Students (MASS). “What I enjoyed the most about DSCC was the student-teacher ratio,” stated Kelley. “The staff knew you by name. It was just like one big family.”

Whittle graduated from DSCC with an Associate of Applied Science degree in Industrial Electronics in May 1993. He began his career in 1974 working in industrial maintenance for Heckethorn Manufacturing. In 1976, he began working for Bennett’s Tool and Die as the tool and die maker. He started working for Bekaert in 1986 as the maintenance team leader. In 1996, he returned to Heckethorn Manufacturing as the vice president of engineering. In 2019, he became the product manager for Rough Country.

He was a member of the 1988 Dyer County leadership group. In addition, he was the president for the Dyersburg Breakfast Rotary in 2001-2002.

Each year, DSCC presents the Outstanding Alumni Award to nominated individuals who have excelled in their field, given back to the community, and served as positive role models. Alumni interested in joining the DSCC Alumni Association should contact Constance Clay at 731-286-3349 or clay@dscc.edu.