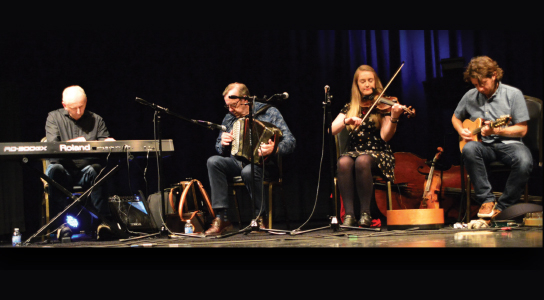 Free admission for student, faculty, staff and the community!

Beginning at 1 p.m., the Band will present a casual Sharing and Learning Music Session inside the Student Center. A mixer with finger foods begins at 6:45 p.m. with a full concert to begin at 7 p.m. inside the Baptist Memorial Health Care Academic Building Auditorium. Admission is a nonperishable food or monetary donation to the DSCC food pantry.

Visiting DSCC from Ireland, the Paul Brock Band’s music is steeped in tradition with a tight, tenacious blend of instruments emphasizing mostly Irish music with a touch of American Old Timey, Bluegrass, French Canadian and other Celtic traditions.

Brock co-founded the Brock McGuire Band in 2000 with fiddle player Manus McGuire. The band has gone on to record a number of highly acclaimed albums including Green Grass Blue Grass, a collaboration with 14-time GRAMMY Award winner Ricky Skaggs celebrating the connection between Appalachian and Irish music. In 2014, the band performed a fully scored program of their music with the Mississippi Symphony Orchestra in Jackson, Mississippi.

As a soloist, Brock has toured extensively internationally. He has performed with leading musicians and has been a special guest artist on a number of occasions with acclaimed Irish band The Chieftains.