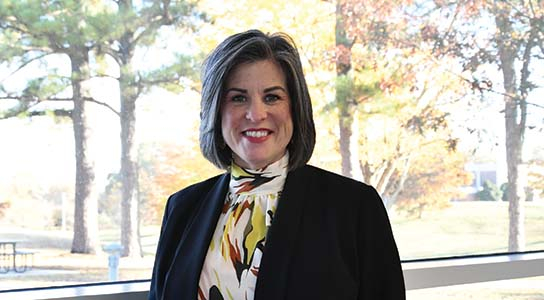 President Karen Bowyer has announced the appointment of Amy West as Director of Human Resources.

“Dyersburg State Community College is pleased to bring someone with such an extensive background in human resources and the TBR system on board. We look forward to capitalizing on Amy West’s comprehensive skill set and increasing the College’s human resources capacity,” stated Vice President for Finance and Administrative Services Dr. Sharron Burnett.

West has worked in human resources for the past twenty years. After obtaining her Bachelor of Science in Agriculture from UTM in 1997, Amy moved to Utah and earned her Master’s degree in Human Resource Management from Utah State University in 2002. West served as the Vice President of Human Resources at The Wasatch Group from 2000-2002, Vice President and Director of Cadence Bank from 2002-2009, MBA Director at Mississippi State University from 2009-2010, and served as Director of Human Resources and Affirmative Action at Jackson State Community College since 2011.

West has been an active member of the Society of Human Resource Professionals (SHRM) and has served on state councils and local chapter boards for the society in both Mississippi and Tennessee. She is currently serving as the Past Director for the TN SHRM State Council and was a member of the Leadership Jackson Class of 2011 and the WestStar Class of 2014. Active in her community, West chairs both the Salvation Army Advisory Board and the WestStar Alumni Advisory Board and serves on the UTM Alumni Council.

West resides in Crockett County with her two daughters Kaitlyn and Katherine.