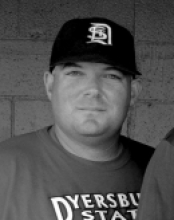 Robert White enters into his 20th season as head coach of the Dyersburg State Community College baseball program. Prior to the 2020 season, the Eagles have won 30 or more games 15 times. DSCC won the TCCAA Conference, Region VII Tournament, and East Central District in 2017 earning a trip to The Alpine Bank JUCO World Series.  He also led the Eagles to a National Ranking of #1 in the nation during the 2017 season. The Eagles finished the 2017 season with the National Ranking of #2 in the country.  The Eagles have been ranked in the top 5 in the national polls, three out of the last four seasons.  As skipper of the DSCC baseball program, he has sent over 250 players to the next level.  He has amassed an impressive overall record of 620-284 during his tenure at DSCC. Coach White has been named the TCCAA Conference Coach of the Year for Region VII in 2013, 2016, and 2017. He has also been awarded ABCA Region Coach of the Year in 2016 and 2017, as well as TBCA Coach of the Year in 2016 and 2017.

Coach White coached at Harris Stowe State College in St. Louis for four years before taking the helm at Dyersburg State Community College. In his final campaign with the Hornets, he led them to a school record of 36 wins.

In his playing days, Coach White was a two-time All-State Baseball player at Jackson High School in Missouri.  He attended Mineral Area Community College and received All Conference and All Region honors during his two year there. He led the Cardinals to a 42-16 record, the all-time record for wins in school history. He signed with the University of Missouri at St. Louis and played one year earning second team in All Mid-American Intercollegiate Athletics Association.

Coach White is married to Dr. Charlene White, and they reside in Friendship, TN.

Tyler Brown is in his first season as an assistant coach on the Dyersburg State Community College baseball staff after he joined the program on September 4, 2020.  Brown’s coaching responsibilities include working with all position players and recruiting.

Prior to Dyersburg State, Tyler Brown spent two seasons as the graduate assistant coach at Delta State University in Cleveland, MS.  At DSU, Brown's responsibilities included coaching the outfielders, first base, and also assisting with the hitters and infielders.  Brown helped the Statesmen capture the 2019 GSC Baseball Tournament Championship and advanced to the NCAA Division II South Super Regional in Tampa, FL, during his tenure.

Brown spent his first two seasons playing at Lipscomb University in Nashville, TN before arriving at Delta State University. During his time with Lipscomb, Brown played in 41 games with 16 starts for the Bisons.

Brown played his prep career at Dyer County High School in Newbern, TN under Preston Ozment. He was a 2014 Louisville Slugger All-American, leading the state of Tennessee with 68 hits as a senior while batting .489 with 22 doubles. Brown also received First-Team All-State selection by Tennessee Baseball Coaches Association (2014), Perfect Game All-Southeast Region Honorable Mention (2014), All-District selection (2012 and 2014), team MVP (2011 and 2014). Brown was rated the No. 5 outfielder and the No. 34 overall player in the state of Tennessee by Perfect Game. He graduated DCHS with a 4.0 GPA and ranked in the top 10 of his class.

Tyler is married to the former Elizabeth Gardner, and they reside in Dyersburg, TN.

Brian Lane is entering his first season as volunteer assistant coach on the Dyersburg State Community College baseball staff after being hired on January 4, 2021.